Come back of menstruation after childbirth (or return of diapers), what should I expect?

Here you are mom, your baby has arrived and that means a lot of changes in your life. One thinks of the long nights that you spend by your baby’s side, the unexpected milk rushes, (thanks to the little stained top) but also of your period. The return of the rules, also called “return of diapers”, will happen little by little. We are all different, so the arrival of menstruation does not happen at the same time or in the same way for all women; expect some changes.

And when is the come back ?

Well, we know that one of the benefits during pregnancy is not menstruating. Unfortunately, these will come back, but when?
First question, were you breastfeeding? The answer to this question will help you determine when your period will be returned.

If you are not breastfeeding, you can expect your period to return between 8 and 10 weeks after giving birth.

Link between breastfeeding and return of menstruation

Prolactin is a hormone made in the brain that causes and maintains the production of breast milk after childbirth. We all have this hormone in us, prolactin is also involved in reproduction, growth and immunity, but its level is greatly increased during pregnancy and in the post-delivery period, especially during breastfeeding.

After giving birth, prolactin levels return to normal in less than two weeks if you are not breastfeeding.

This hormone prevents ovulation, and therefore menstruation. But in 10% of women, this is not the case. In addition, the return of the diaper is preceded by a period of ovulation which took place 15 days before. What does it mean? That you are likely to ovulate at any time without realizing it. Ovulation also means a possible new pregnancy. Breastfeeding is therefore not a reliable means of contraception. If you do not wish to become pregnant again immediately, you must use contraception.

What can we expect?

The first thing that happens after childbirth is the lochies. It is a mixture of blood and debris from the lining of the uterus. It sounds a lot like the rules, but it isn’t! We tell you more about it in the article available here.

The first period after baby is not the same as what you’re used to. Your period may be heavier. If you are new to Niagara Falls, welcome!

For users of menstrual cups, a size change may be necessary because if you experience an increase in menstrual flow, the capacity of your menstrual cup may no longer be sufficient. Besides, the body changes after childbirth, and so does the vagina ! If you notice leakage but the cup is not full, the menstrual cup is too small and no longer adheres well to the walls of the vagina, which may have distended. For more information on menstrual cup sizes, please consult our size guide.

Cramps may also intensify during this period. We invite you to discover our natural tips that will help you relieve your pain by clicking here. 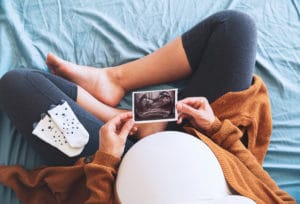 Beware, however, of the warning signs :

If your periods are really heavy, that is to say, if your sanitary napkin is full in 1 hour, or if you have to change your menstrual cup every hour, it means that the abundance of periods is abnormal. Consult your health care professional to avoid any complications.

Lochies or postpartum bleeding : Can a menstrual cup be used after childbirth? 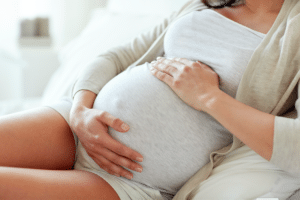 That’s it, after 9 months of more or less patient waiting, your baby is here with his procession of little joys and insomnia. As your body slowly recovers from pregnancy and childbirth, the post-natal (or post-partum) process usually takes several weeks and this is completely normal. Symptoms of this process include lochia, the blood loss that occurs just after birth. What exactly is it? How long do lochies last? What hygiene measures need to be taken or avoided in order to manage them on a daily basis? When can I use my menstrual cup?

Is it normal to bleed after childbirth?

YES ! This is completely normal, whether you had a vaginal delivery or a Caesarean section. During pregnancy, the uterus grows and thickens as the fetus grows. To schematize, it goes from the size of a pear to that of a big BIG watermelon. In addition to growing, the uterus develops a new organ: the placenta, which will bring nutrients to the fetus, rid it of the waste it produces and secrete hormones. Once the baby is born, about 30 minutes after birth, the uterus contracts to expel the placenta, leaving a sore on the uterine wall. The uterus also begins to shed its inner lining, which is no longer useful after birth. It’s the lochies. They are part of the natural process of post-natal care, during which the uterus will return to its original size in 6 to 8 weeks. So don’t worry!

Postpartum bleeding: what should I expect ?

Postpartum bleeding, or lochia, is a mixture of blood and debris from the lining of the uterus. In fact, at the beginning it looks a lot like rules, even if technically it’s not the same thing :

The lochies can therefore last up to 6 weeks after delivery. If you are breastfeeding, breastfeeding causes the production of oxytocin, a hormone that will cause contractions of the uterus and shorten the time of the lochia. If you have carried twins or triplets, it is possible that your lochies are more abundant and last longer.

Lochies: how to manage them?

Because they look a lot like rules, one may be tempted to use the same things to absorb or collect them : Tampons, pads or menstrual cups. But beware, menstruation and lochies are two very different phenomena, so the precautions to take are not the same!

The cervix and cervical mucus act as a barrier to bacteria in the vagina to prevent them from entering the uterus, which must remain free of bacteria. During childbirth, the cervix dilates to let the baby through, and this reflex is triggered even if the delivery is by caesarean section. It takes several weeks for the cervix to close and during this time it no longer plays its role as a barrier to bacteria as well.

During the time of the lochies, it is therefore important not to insert anything into the vagina, because it is necessary to avoid introducing bacteria that could go up in the uterus.

This unfortunately means that you must avoid bathing, swimming, and penetrative cuddling, and that you cannot use tampons or menstrual cups. So you still have the towels, but not just any towels: the super-absorbent ones-with (sexy!) pantyhose: And yes! They have the advantage of being very absorbent and thick, which will allow you to sit without too much difficulty. The maternity ward will surely provide you with some, but plan a small stock at home.

As far as intimate hygiene is concerned, you don’t need to do a complete intimate wash every time you go to the little corner. Just make do with an intimate cleansing once a day, simply with water or a cleansing gel with the appropriate pH.

If your lochies have an unpleasant rotten fish-like odour or if you bleed at an unexpected time, seek medical advice: it may be a sign of an infection of the uterus due to debris from the placenta or a poorly evacuated blood clot. If the bleeding is so heavy that you fill a towel in 1 hour, it’s the same thing: quickly inform your health professional (midwife, gynecologist…) because you risk losing too much blood.

Don’t forget the most important thing: take care of yourself.

You and your body have just gone through the long and (often) trying stages of pregnancy and birth. You have carried a child for 9 months, and now that it is born, the uterus “cleans up” and is slowly recovering from this upheaval. The inevitable stage of lochies is a reminder that it’s important to take this time (and more!) to recover and take care of you and your baby.

Do you have further questions about the daily use of your menstrual cup? Write on social networks or by email to: contact@claripharm.fr

Tags:
menstrual cup
Facebook Twitter linkedin WhatsApp WhatsApp
Newer Menstrual cup and IUD: Can you use a cup if you wear an IUD?
Back to list
Older Menstrual Precariousness

Facebook Twitter linkedin WhatsApp WhatsApp
Every month, 2 billion women around the world have their period. In France, 16 million womenbetwe...

END_OF_DOCUMENT_TOKEN_TO_BE_REPLACED

All about Premenstrual Syndrome (PMS)

Facebook Twitter linkedin WhatsApp WhatsApp
There are6 explanations other than pregnancy that can explain a delay in menstruation. Don't worry, ...

END_OF_DOCUMENT_TOKEN_TO_BE_REPLACED

4 tips to balance your vaginal flora

END_OF_DOCUMENT_TOKEN_TO_BE_REPLACED

MY 10 NATUROPATHIC TIPS FOR LIVING BETTER WITH ENDOMETRIOSIS

Facebook Twitter linkedin WhatsApp WhatsApp
Officially, 1 woman out of 10 would be affected by endometriosis. This disease is very painful and i...

END_OF_DOCUMENT_TOKEN_TO_BE_REPLACED

Facebook Twitter linkedin WhatsApp WhatsApp
We often hear about the vaginal flora or the vaginal microbiota. But what are they really? What is t...

END_OF_DOCUMENT_TOKEN_TO_BE_REPLACED

All you need to know about periods and menstrual cycles

Facebook Twitter linkedin WhatsApp WhatsApp
That's it, your period has arrived ! With varying degrees of regularity, pain or fatigue, they are...

END_OF_DOCUMENT_TOKEN_TO_BE_REPLACED

Facebook Twitter linkedin WhatsApp WhatsApp
The whole Claripharm Team wishes you an excellent year 2019 ! A new year at your side... Happy New Y...

END_OF_DOCUMENT_TOKEN_TO_BE_REPLACED

Facebook Twitter linkedin WhatsApp WhatsApp
Here they are, your periods has been arrived ! With more or less regularity, painful or tiredness....

END_OF_DOCUMENT_TOKEN_TO_BE_REPLACED

Facebook Twitter linkedin WhatsApp WhatsApp
New in your bathroom, the intimate shower gel Clarigyna™ becomes your must-have. How to use it, wh...

END_OF_DOCUMENT_TOKEN_TO_BE_REPLACED

Chemical Products & Hygienic Protection. What security for our periods?

Facebook Twitter linkedin WhatsApp WhatsApp
Internal hygienic protections: "inserted in the vagina", such as tampons and menstrual cups, have be...

END_OF_DOCUMENT_TOKEN_TO_BE_REPLACED

Claricup, how to use your menstrual cup?

Facebook Twitter linkedin WhatsApp WhatsApp
A new item in your bathroom, the menstrual cup is becoming a monthly must-have for more and more w...

END_OF_DOCUMENT_TOKEN_TO_BE_REPLACED

For any order before 12h

close
Start typing to see products you are looking for.