Menstrual cup and IUD: Can you use a cup if you wear an IUD?

A woman’s life is shaped by several significant adventures: the first menstrual period, the choice of contraception, giving birth, the menopause. What do all these adventures have in common? You’re right, they all require intimate hygienic protection.

Convinced of the cup or still hesitating to take the plunge, we come back to the questions we are most asked about the menstrual cup and the stages of life of your femininity.

Can we use the Claricup menstrual cup if we wear an IUD?

Copper IUDs tend to increase the volume of menstruation, which often leads to leakage with conventional sanitary protection.

Among all the advantages of the cup, many of you pass the milestone of choosing the Claricup menstrual cup for its superior collection capacity compared to tampons.

Let’s go back together on the state of scientific knowledge to date :

IUDs, also known as IUDs or IUS (Intrauterine Devices or Systems), are a means of contraception. They are placed in the uterus for several years and can act in two different ways:

An IUD can be inserted by a gynaecologist, midwife or general practitioner. It is inserted into the bottom of the uterus via the cervix, an opening at the bottom of the vagina that is no larger than a match head. In order to be able to remove it at the appropriate time, the health care professional leaves the IUD threads protruding into the vagina. 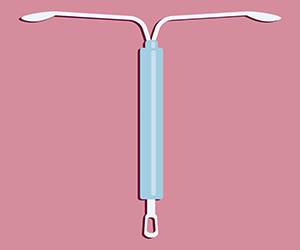 There is no contraindication to wear a Claricup with an IUD.

Much has been heard about the suction effect of the cups, which would be able to suck the IUD out of the uterus, or about women pulling on the threads of their IUDs.

However, a menstrual cup simply does not have enough strength to aspirate anything: in fact, a Canadian study conducted in 2011 showed that during the 6 weeks following the insertion of an IUD, there was no greater risk of losing the IUD if women used tampons, pads or menstrual cups (Wiebe & Trouton, 2012).

To avoid the risk of pulling on the IUD sutures, it is important to discuss this with the healthcare professional who is inserting the IUD, asking him or her to cutthe sutures short enough. This is obviously something that can also be done after the insertion, should you decide to use a Claricup after 2 years of IUD use. It is also an opportunity for you to ask yourself how to check yourself every month that your IUD has not moved during your period.

What precautions to take?

There are two important parameters:

When inserting the IUD, do not hesitate to mention to your healthcare professional that you are a user of the menstrual cup. So ask him to cut the IUD wires very short. The risk is not to aspirate your IUD by unscrewing your cup, no. There is a risk of catching the threads of your IUD and therefore removing it! Therefore, take the necessary precautions at the time of installation.

If you have already inserted your IUD, don’t panic, don’t hesitate to talk about it with your healthcare professional at your next visit.

To do this, pinch the base of your cup, then once you feel that it no longer adheres to the walls of your vagina, you can gently remove it by pulling on the base. The stem serves only as a guide to find the base of the menstrual cup, under no circumstances should you pull on the stem to remove your menstrual cup.

If you respect these two parameters then long life to the cup!

For any order before 12h

close
Start typing to see products you are looking for.